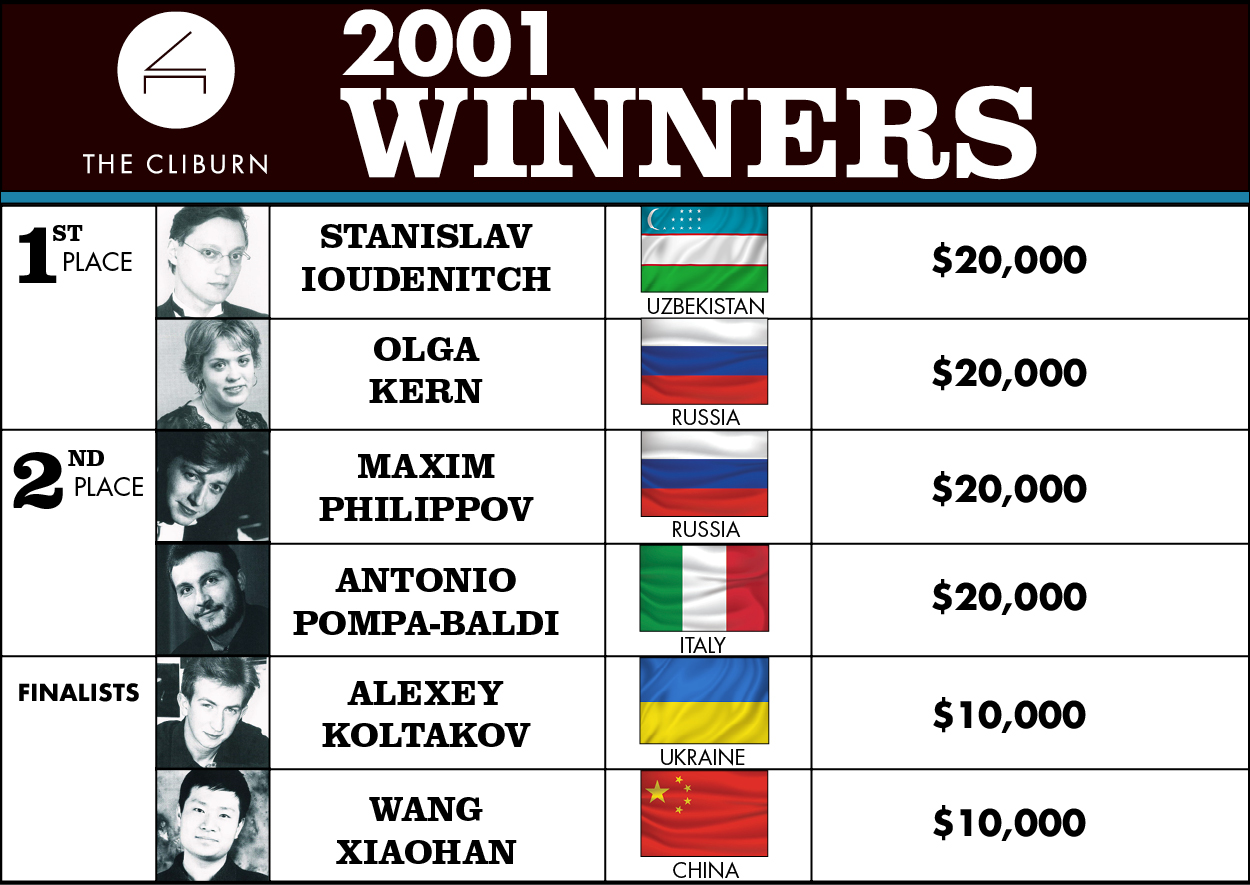 STANISLAV IOUDENITCH  A native of Uzbekistan, Mr. Ioudenitch, who shared the gold medal in 2001, founded and teaches at the International Center for Music at Park University in Kansas City, where he is also artistic director and associate professor. He will join the piano faculty of the Oberlin Conservatory of Music in autumn 2017. He also is vice president of the International Piano Academy Lake Como.

OLGA KERN  The co-winner is now recognized as one of her generation’s great pianists. She performs at the world’s great venues—including the Great Hall of the Moscow Conservatory, La Scala in Milan, and Carnegie Hall in New York—and collaborates with top conductors including Valery Gergiev, Christoph Eschenbach, and Marin Alsop. She has released six recordings on harmonia mundi usa, including her Grammy®-nominated Rachmaninoff disc. In 2016, she was jury chairman of the Seventh Cliburn International Amateur Piano Competition. In October 2017, she will perform Barber’s Piano Concerto with Leonard Slatkin and the Detroit Symphony Orchestra to celebrate her American citizenship.

MAXIM PHILIPPOV  The co-silver medalist has performed recitals in top venues in Asia and Europe and is also a professor of piano at the Moscow Tchaikovsky Conservatory.

ANTONIO POMPA-BALDI  The Italian pianist who shared the silver medal maintains an active concert schedule and has recorded 20 CDs. In 2014, he completed performances of all the Rachmaninoff piano concertos with the Cape Town Philharmonic Orchestra, and in 2015, he performed all the Beethoven concertos in Fresno. He is one of the most prolific recording artists for SPIRIO, Steinway’s new high-resolution player piano, and teaches at the Cleveland Institute of Music.

ALEXEY KOLTAKOV  The Ukrainian finalist has toured Asia, Australia, Europe, North America, and Russia, and earned undergraduate and master’s degrees from The Juilliard School in 2012 and 2014. He has established a piano studio in Sydney, Australia.

WANG XIAOHAN  The Chinese pianist, who played one of his own works in the Competition, is active as composer, conductor, pianist, and teacher.