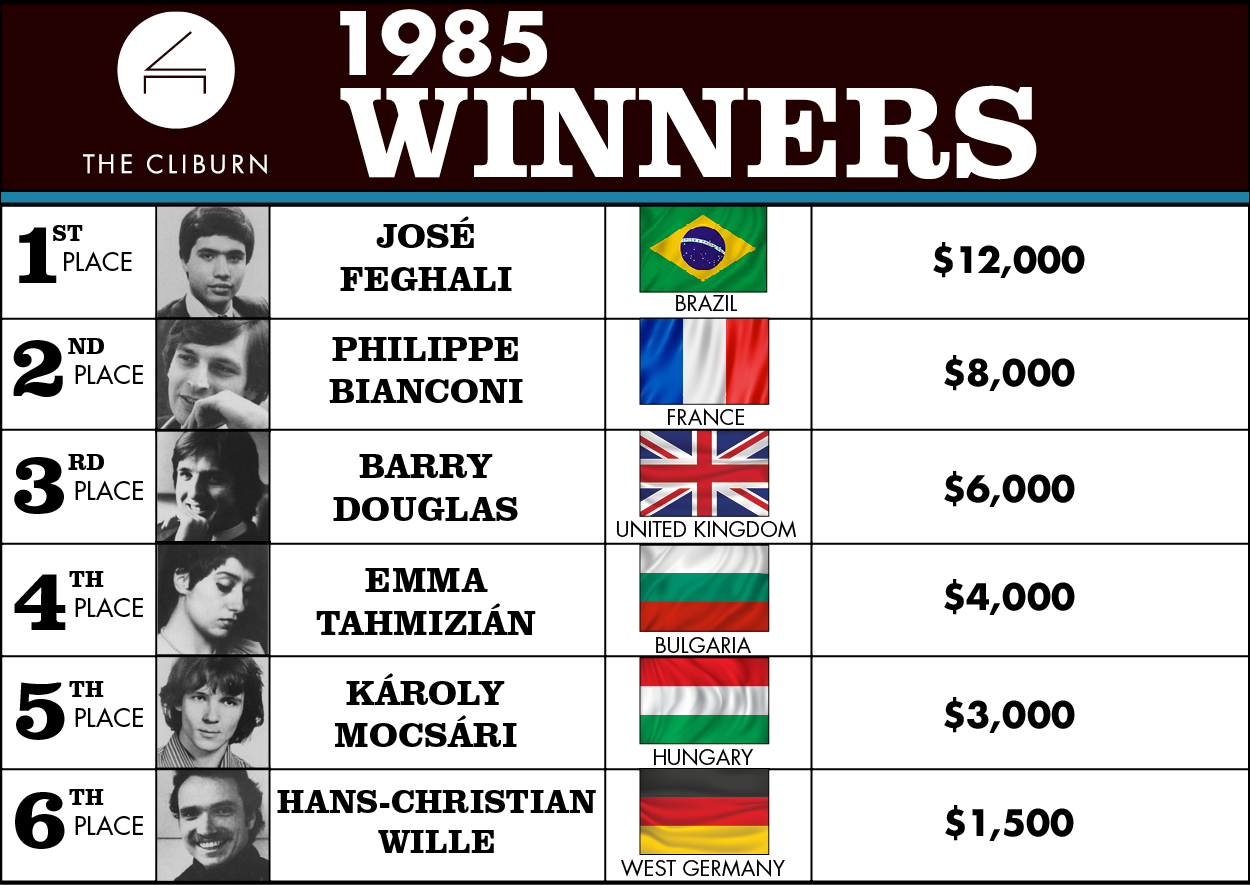 JOSÉ FEGHALI  The British-trained Brazilian pianist went on to have a notable performing and recording career after his gold-medal win. He was artist-in-residence at Texas Christian University, where he also was recognized for his work with Internet2, video conferencing, sound/audio engineering, and streaming technology. He passed away in Fort Worth, Texas, in 2014.

PHILIPPE BIANCONI  The French-born silver medalist performs extensively in Europe and North America as recitalist and concerto soloist. He recently released a Chopin recording, which joins his acclaimed discography of Debussy, Schumann, Schubert, and the complete solo works of Ravel.

BARRY DOUGLAS  After winning the third prize, the Irish pianist became the first non-Russian since Van Cliburn to win gold at the Tchaikovsky Competition in Moscow. In addition to maintaining a busy schedule as a concert pianist, Mr. Douglas founded and directs the Camerata Ireland chamber orchestra. He also is engaged in a project for Chandos to record the major solo piano music of Brahms and Schubert; the sixth and final Brahms volume was released in 2016.

EMMA TAHMIZIÁN  The Bulgarian finalist is notable as a champion of new music who premiered Sebastian Currier’s Piano Concerto in 2007. She is a founding member of the MOSAIC quartet and maintains a longstanding association with the Bowdoin International Music Festival in Maine.

KÁROLY MOCSÁRI  Mr. Moscári continues to perform and teach in his native Hungary and throughout Europe. He has served on the juries for Liszt competitions in Budapest, Utrecht, and Weimar.

HANS-CHRISTIAN WILLE  The German finalist has made a number of well-regarded recordings and continues to concertize. In 1988, he founded the event that grew into the Braunschweig Classix Festival, one of the biggest festivals in Europe. In 2015, he became a professor at the Academy of Music at the Suzhou University of Science and Technology in China.