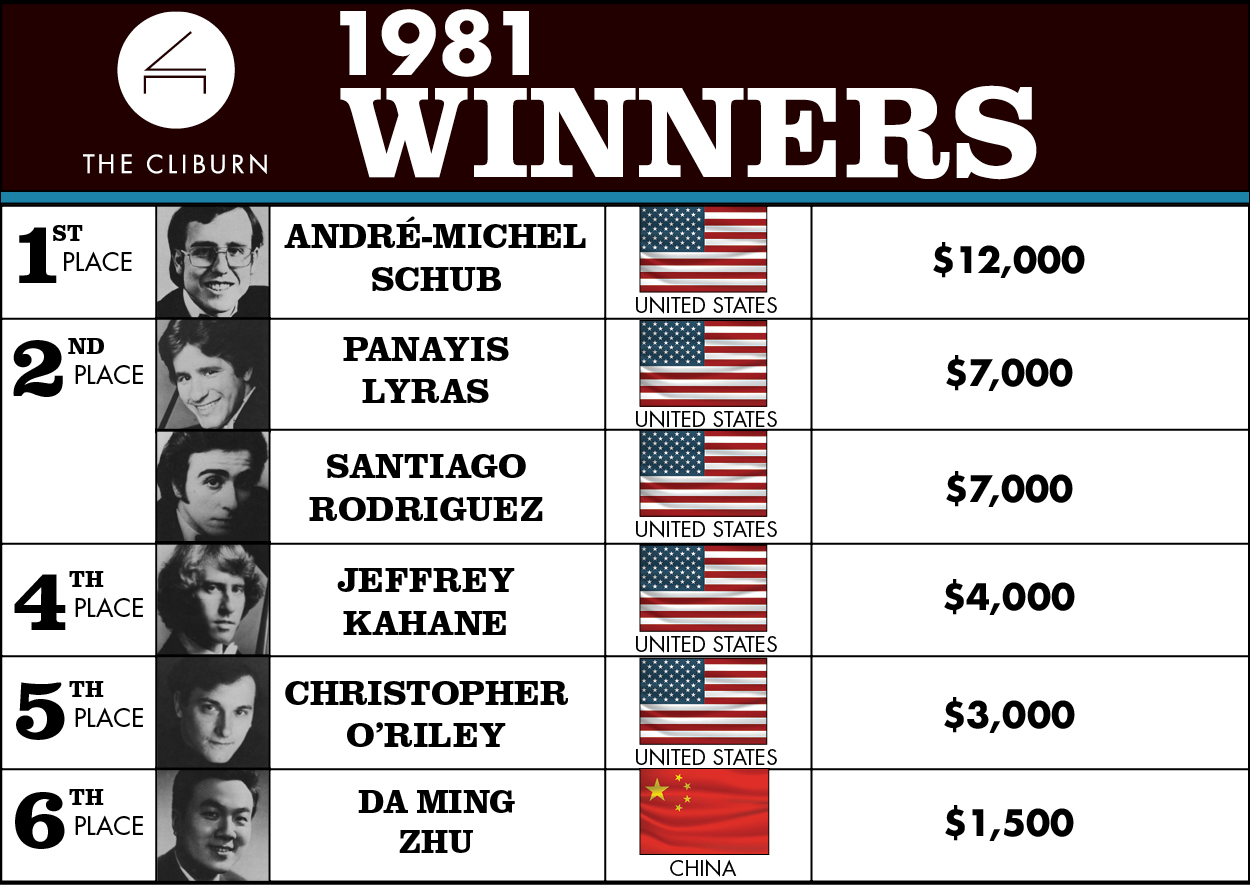 ANDRÉ-MICHEL SCHUB  The gold medalist has performed with the world’s most prestigious orchestras and currently tours as a member of the Chamber Music Society of Lincoln Center. He also is music director of the Virginia Arts Festival Chamber Music Series and has been on the faculty of the Manhattan School of Music since 2006.

PANAYIS LYRAS  Mr. Lyras, who shared the silver medal, succeeded 1962 gold medalist Ralph Votapek as artist in residence at Michigan State University, where he is also professor of piano.

SANTIAGO RODRIGUEZ  The co-winner of the second prize is considered a leading interpreter of Rachmaninoff and is currently recording The Rachmaninoff Edition, the complete catalog of the composer’s solo piano works. He maintains an active performing career and has been featured many times on the ABC, CBS, NBC, CNN, BBC, and CBC television networks.

JEFFREY KAHANE  The fourth-prize winner has maintained a high profile as conductor and soloist. He just completed his 20th and final season as music director of the Los Angeles Chamber Orchestra. Sample recent engagements include Oregon Bach Festival, the Ravinia Festival with the Chicago Symphony, and New York’s Mostly Mozart Festival, and the Chamber Music Society of Lincoln Center.

CHRISTOPHER O’RILEY  From his groundbreaking transcriptions of Radiohead, Elliott Smith, and Nick Drake, to performances of the classical canon, American Christopher O’Riley has stretched the piano beyond conventional boundaries. As host of the popular radio and television show From the Top, this Cliburn finalist also nurtures the next generation of talent.

DAMING ZHU  Mr. Zhu serves on the piano faculty of Soochow University in Taiwan, where his students have won prizes at renowned international piano competitions. He continues to perform and teach in his native China, helping to build an artistic bridge between the two long-estranged nations. His recording of the complete Chopin Preludes will be released soon.