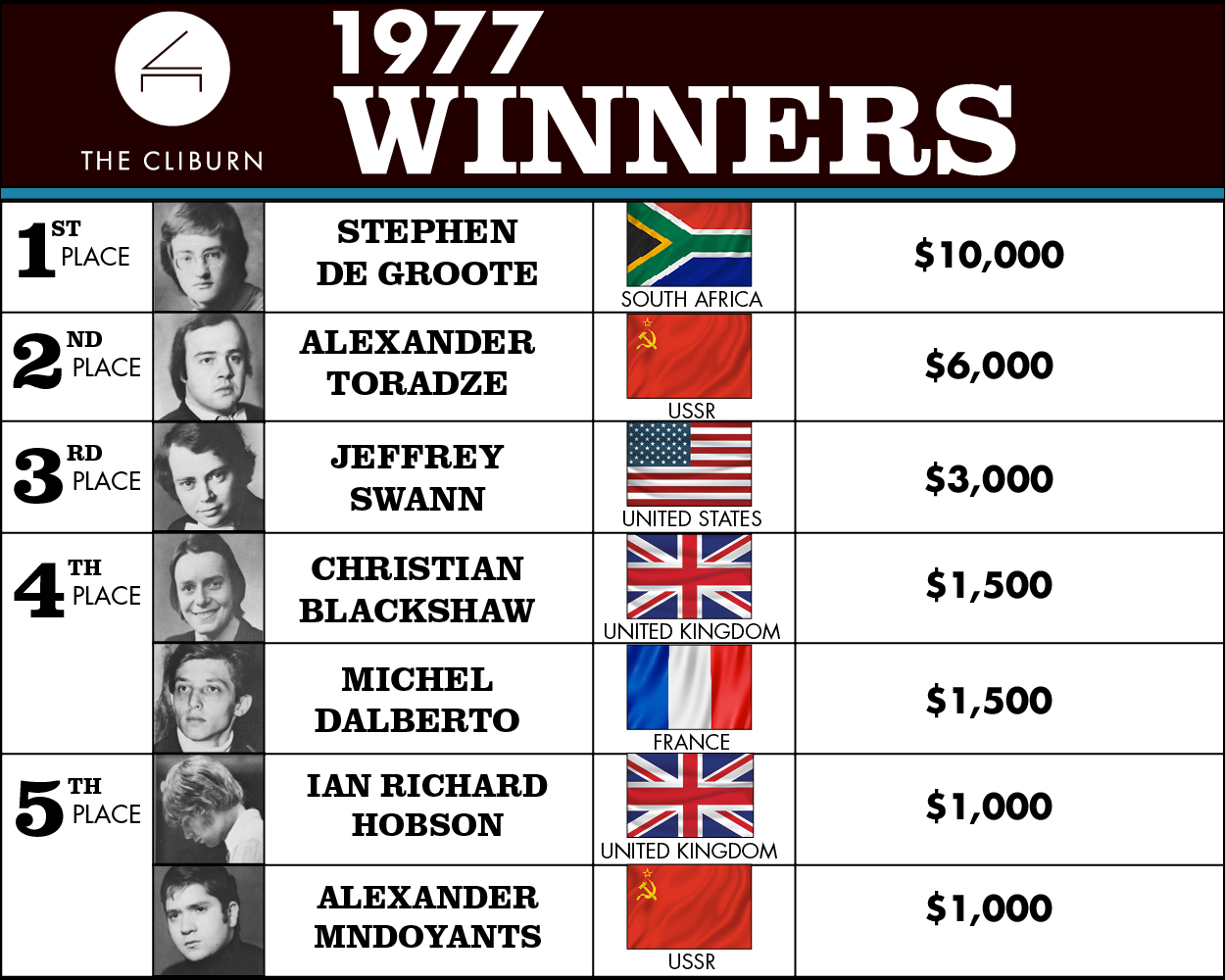 STEVEN DE GROOTE  After winning the first prize, the South African pianist went on to perform in top venues and with the world’s foremost orchestras. His career suffered a setback when he was seriously injured in a plane crash in 1985, after which he settled in Fort Worth as artist-in-residence at TCU. He passed away in South Africa in 1989.

ALEXANDER TORADZE  While continuing a busy international performing career, the silver medalist became the Martin Endowed Professor of Piano at Indiana University in 1991, and founded the highly regarded Toradze Touring Studio. Mr. Toradze continues to perform and record with leading orchestras worldwide, and serves on the jury of the 2017 Cliburn Competition.

JEFFREY SWANN  The American bronze medalist is well established as a lecturer-recitalist. He currently is professor of piano at New York University, artist-in-residence at Northern Arizona University, and artistic director of the Dino Ciani Festival and Academy in Cortina d’Ampezzo, Italy.

CHRISTIAN BLACKSHAW  The British pianist recently completed a sold-out recital tour in China. His complete Mozart sonata series at Wigmore Hall in 2013 was recorded and released in four acclaimed volumes—the fourth was named one of the best classical recordings of 2015 by The New York Times.

MICHEL DALBERTO  A noted recitalist and chamber musician known for his collaborations with artists including Jessye Norman and Barbara Hendricks, Mr. Dalberto served for many years as chairman of the jury of the Clara Haskil competition, and is a professor at the Paris Conservatory.

IAN HOBSON  Mr. Hobson, who teaches at the University of Illinois at Urbana-Champaign, has made more than 60 recordings in the course of a busy performing career, including the complete piano sonatas of Beethoven and Schumann. He is now recording a complete edition (the most comprehensive to date) of the piano works of Chopin.

ALEXANDER MNDOYANTS  The Russian finalist has a reputation as a dedicated pedagogue, and teaches at the Moscow Conservatory and State Classical University. He regularly conducts master classes in Russia and Eastern Europe, as well as in Brazil, Finland, France, Israel, Japan, Portugal, and Taiwan.