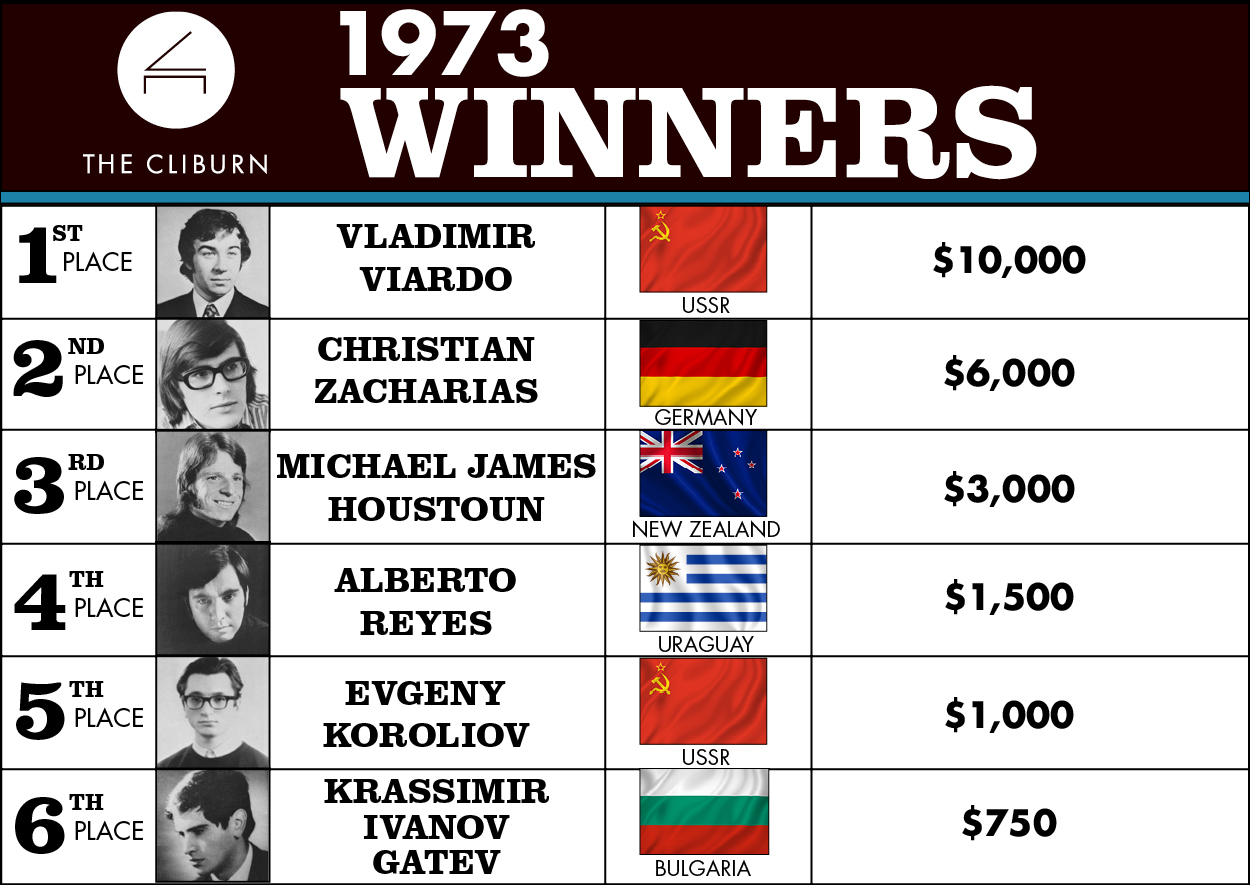 VLADIMIR VIARDO  Soon after winning gold at the Cliburn, Mr. Viardo was detained behind the Iron Curtain for 14 years. When he was finally permitted to travel to the West in the late 1980s, his career flourished with performances at Carnegie Hall, the Concertgebouw, and the Lincoln and Kennedy Centers, and through collaborations with leading orchestras and conductors of the day. He has taught piano at the University of North Texas since 1989.

CHRISTIAN ZACHARIAS  The silver medalist, one of the top German pianists of the past few decades, began conducting in 1992 and is a long-term artistic partner of the St. Paul Chamber Orchestra. During his long tenure as principal conductor of the Orchestre de Chambre de Lausanne, his recordings with the orchestra won widespread acclaim, notably the complete Mozart piano concertos. He also often conducts opera.

MICHAEL HOUSTOUN  The third-prize winner is a central music figure in New Zealand, and also performs frequently in Australia and Asia. As part of his wide-ranging repertoire, he regularly champions New Zealand composers in his programming.

ALBERTO REYES  After a successful beginning as a concert pianist (he made his U.S. orchestral debut under the baton of Aaron Copland), this Uruguayan pianist changed careers and became a United Nations interpreter, working for the Security Council and General Assembly in New York and having a front-row seat for the major international debates of our time. He retired after three decades, returned to performing, and has recorded CDs of music by Chopin and Schumann.

EVGENI KOROLIOV  The Russian pianist continues an active performing and recording career, with engagements in recent years including Mozart under Valery Gergiev at the Mariinsky in St. Petersburg and Bach’s The Art of the Fugue with the Berlin Philharmonic Orchestra.

KRASSIMIR GATEV  The sixth-place winner recorded nine albums and performed across Europe and the United States. He was professor of piano at the National Academy of Music in his native Bulgaria until his death in 2008.