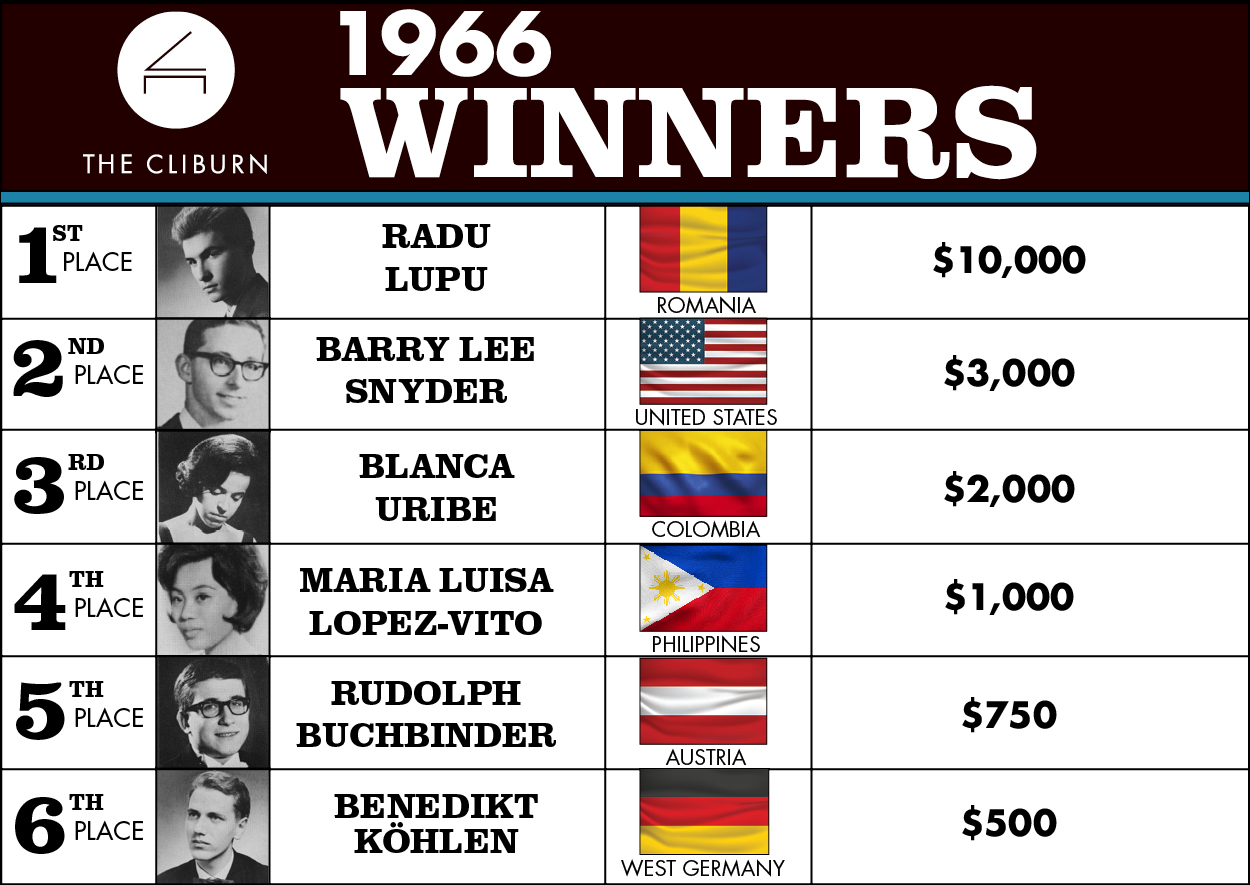 RADU LUPU  The 1966 gold medalist is firmly established as one of the most important musicians of his generation. He performed regularly at the world’s most prestigious venues and with the foremost orchestras. At the end of the 2018–2019 concert season,  Mr. Lupu retired from the concert stage at the age of 73. He has more than 20 recordings to his credit, including a Grammy®-winning disc of Schubert sonatas.

BARRY SNYDER  The second-prize winner remains busy as a performer and teacher. He has appeared with many leading orchestras under conductors including Leopold Stokowski, David Zinman, and Arthur Fiedler. He joined the faculty of the Eastman School of Music in 1970, where he was a founding member of the Eastman Trio, with which he performed for many years. His commitment to new music has resulted in a number of works written just for him. Mr. Snyder has made more than 50 recordings.

BLANCA URIBE  The bronze medalist performs frequently in Europe, South America, and the United States. Her notable achievements include recordings of the complete Iberia suite of Isaac Albéniz, and performances of all 32 Beethoven sonatas in South America and at Vassar College. She has served on many competition juries, including at the 2013 Van Cliburn International Piano Compeititon.

MARIA LUISA LOPEZ-VITO  Ms. Lopez-Vito retired from live performance in 2002. She devoted her career to championing the piano music of Theodor Adorno and to teaching piano to disadvantaged children in her native Philippines.

RUDOLF BUCHBINDER  Mr. Buchbinder is renowned as a leading interpreter of the Viennese classical repertoire. His discography includes more than 100 recordings, including the complete concertos of Beethoven, Brahms, and Mozart. Highlights of this season including tours with the Vienna Philharmonic and a Carnegie Hall appearance. Mr. Buchbinder has performed the entire cycle of Beethoven sonatas more than 50 times, including in Berlin, Beijing, and St. Petersburg, and four times each in Vienna and Munich.

BENEDIKT KÖHLEN  The German finalist went on to win third prize at the Busoni competition and make a number of recordings.