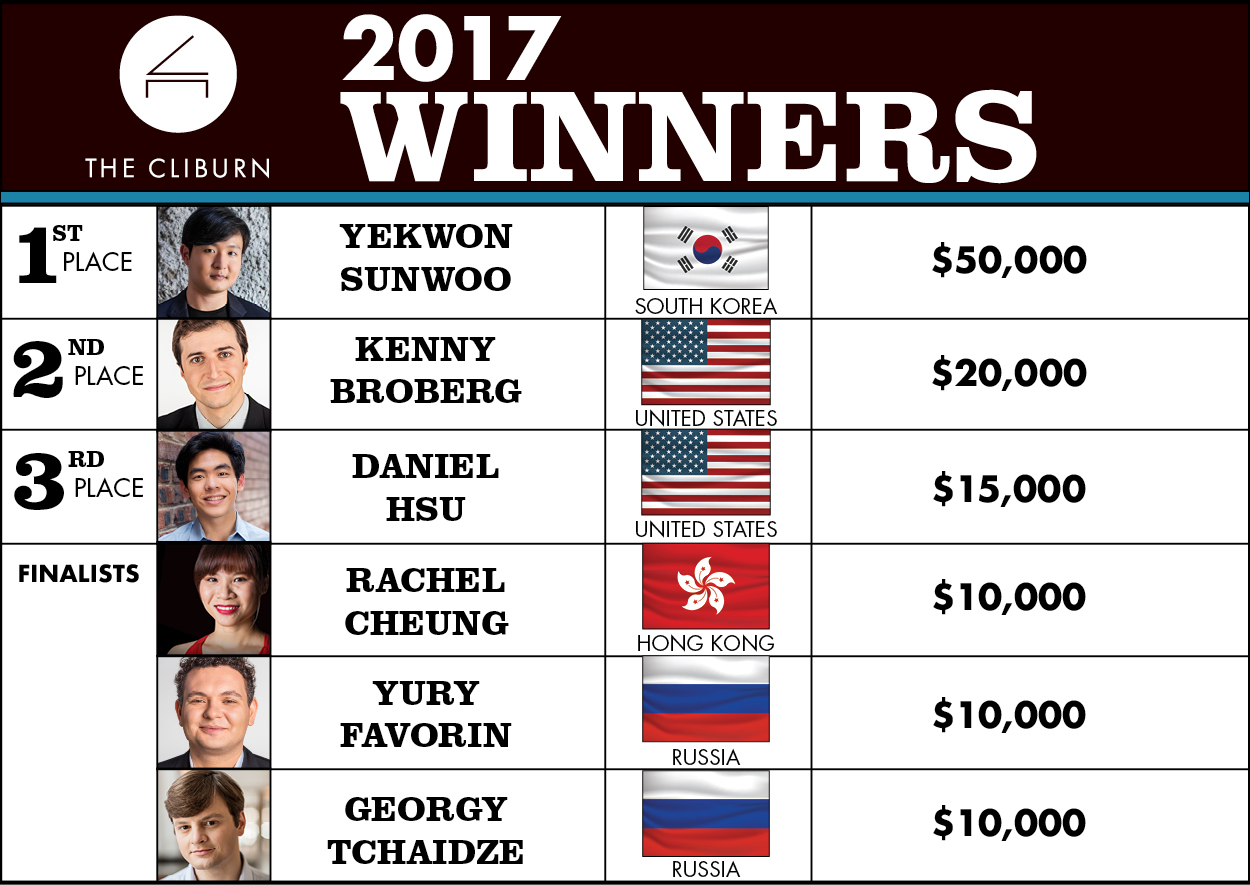 YEKWON SUNWOO Since his Cliburn gold medal win, the Korean pianist has graced the cover of Forbes Korea as one of 40 power leaders, was declared “one to watch” by International Piano magazine, and was featured in the Korean reality show “Stranger.” He released an introspective two-disc Mozart album in 2020 and maintains an active concert schedule in the United States, Europe, and Asia. He splits his time between Berlin and Seoul, where he started a young artist mentorship program.

KENNY BROBERG Kenny followed his Cliburn silver medal with a bronze at the 2019 International Tchaikovsky Competition before winning the 2021 American Pianist Award. In the last five years, he has traversed Europe, Asia, Australia, and North America on tour and has begun to include his own short compositions in recitals. His first studio album of Medtner and Scriabin is slated for release in late 2022. He is currently artist-in-residence at the University of Indianapolis and was recently appointed deputy professor at the Reina Sofía School of Music in Madrid.

DANIEL HSU The bronze medalist was profiled as “one to watch” by International Piano magazine and enjoys a burgeoning concert career in North America, Europe, and Asia. Recent and upcoming highlights include collaborations with Gemma New, Ruth Reinhardt, and Francesco Lecce-Chong, as well as performances with the Vancouver Recital Society and at South by Southwest. He graduated from Curtis in 2019, and recently moved to the Bay Area. Co-developer of the award-winning Workflow app (now known as Siri Shortcuts), he still enjoys flexing his tech brain.

RACHEL CHEUNG The Audience Award winner continues to build her profile, both in her hometown of Hong Kong and abroad. A curious and enthusiastic collaborator, she has performed with the Asian Youth Orchestra on its friendship tour, partnered with the Hong Kong Ballet in her first experience with dance, play/directed for the first time in 2019 (followed by several more opportunities) and begun experimenting with film and projections. She was named Artist of the Year (Music) by the Hong Kong Arts Development Council in 2019, and was featured in the Hong Kong Philharmoinic’s first live broadcast concert in 2020.

YURY FAVORIN Recent highlights of the Russian finalist’s career include collaborations with the Seattle and Montreal Symphony Orchestras and recordings featuring solo music by Alkan (MUSO) and Prokofiev violin sonata (MUSO). Trained in composition, he is a founding member of the ensemble ERROR 404 devoted to free improvisatory music and continues to champion new work. He is currently assistant professor at the Moscow Tchaikovsky Conservatory.

GEORGY TCHAIDZE Now based in Berlin, Georgy will be in residence with Nikita Boriso-Glebsky and Narek Hakhnazaryan as piano trio in residence at the Wiener Konzerthaus next season. Recent highlights include appearances at the Cartagena Music Festival, a tour of South Africa, and several concerts throughout Europe and Asia.