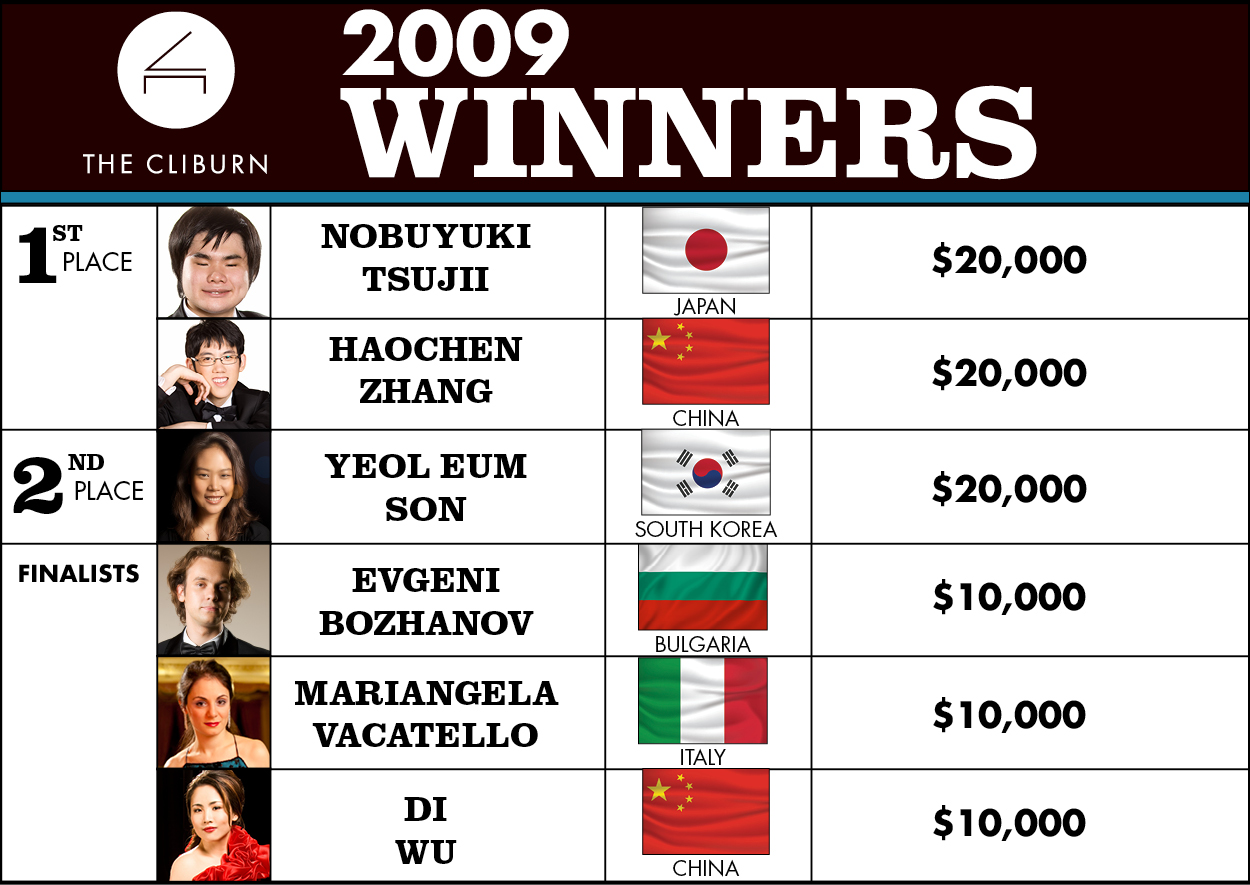 NOBUYUKI TSUJII  The Japanese pianist rocketed to celebrity status when he won Cliburn gold. He has performed in the top venues across four continents and is an exclusive recording artist for Avex Classics International. He was featured prominently in the 2021 Tokyo Paralympics Opening Ceremony, and is the subject of Peter Rosen’s documentary Touching the Sound.

YEOL EUM SON The South Korean followed her silver medal win at the Cliburn with silver at the Tchaikovsky Competition in 2011. Her performance career spans North America, Europe, and Asia, and she records for DECCA and Onyx. Recognized for her versatility and creativity, she was appointed artistic director of Music in PeongChang 2018; she is also active as a writer and TV personality and collaborated with Chanel on its 100th Anniversary for W Korea magazine.

EVGENI BOZHANOV  The native of Bulgaria has built a reputation as a risk-taking, original pianist and is active in Europe and Asia. He was appointed professor of piano at the Folkwang Universität der Künste (Essen) in 2019, the same year as his latest recording by Avanticlassic.

MARIANGELA VACATELLO Ms. Vacatello was artist-in-residence alongside composer Georges Aperghis at IRCAM, a Paris-based incubator for music and technology. A prolific recording artist, she released her newest recording of Chopin and Schumann in August 2021, which joins a versatile discography featuring Ginastera, Liszt, and Debussy. Based in Umbria, she balances her performance activities with her commitment to teaching at the Conservatoire “F. Morlacchi” and the Pinerolo International Music Academy.

DI WU Now based in Montreal, Ms. Wu has performed widely in Asia, Europe, and the United States, highlighted by collaborations with Christoph Eschenbach, James Conlon, Ludovic Morlot, Yu Long, and Charles Dutoit. She embarked on a sold-out arena tour with singer Sarah Brightman in China, Japan, Korea, Taiwan, and Mexico, and a sold-out stadium concert in Tokyo, which was recorded and released by Sony-Epic Records.